Early start this morning to get to St Malo in time. Karl turned up at 5.30 to pick me up. We both seem to be early risers.
Karl whizzes along - pushes his old van to the limit. He talks constantly (wonder if he's a bit lonely in that huge house?). He also has his CD player turned right up (nice sounds - JJ Cale, Ry Cooder, MuddyWaters, etc). We still had time to stop off for a coffee on the way and got to the port at St Malo to watch the ferry come in.
Laura didn't look as if she had a wonderful journey; said she'd been sick a few times and hadn't been able to eat anything. Karl suggested stopping off in Dinan for something to eat before picking up his furniture. The old town centre is full of historical buildings and Laura seemed to really like it. 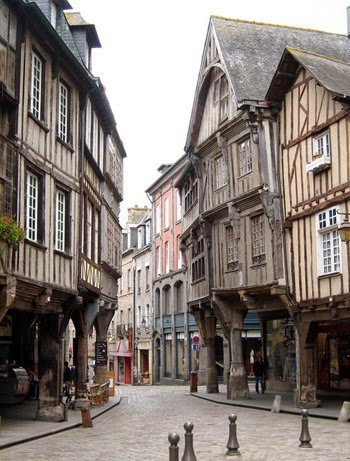 She cheered up once we found a café and had baguettes and coffee. It only took ten minutes from Dinan to Karl's pick up place; a beautiful manoir where a bureau and chest of drawers was ready to be collected. Laura said the manoir was how she imagined Monsieur Henri's house to be (Amatore's Restaurant - chapter 23).
When we arrived back Laura wanted to take a look around, so the three of us went for a walk down the lane. Met Jean-Luc who was pottering around in his yard (wonder if he and his wife ever talk to each other). I introduced him to the others. Karl thinks the whole Gertrude saga is hilarious - says I should tell Jean-Luc the truth, but I'm not so sure; I don't think it would go down too well.


Once Karl had left, Laura and I sat out in the garden and discussed promotion for my books. She has lots of useful suggestions.
Posted by Unknown at 02:21