Early this morning I helped Karl pick up two writing desks from a Convent near Pontivy. The house is being sold and the nuns are moving to Rennes. We were given a guided tour of the lovely old building by the Mother Superior, a little old lady who talked incessantly and wouldn't let us leave without cake and coffee. It was almost lunchtime by the time we drove off.
Karl wanted to check on Jean-Luc. The last time he'd called round, he'd found him sleeping in the cowshed with Hilda whilst Marie fussed over her creepy twin brothers. I asked if Jean-Luc had remembered any more Hilda dreams, but Karl thought not. He said he'd been irrational and was impossible to reason with. Karl was annoyed with Marie because of her attitude towards her husband, saying she seemed to have no sense of loyalty towards him.
The rain was falling steadily when we arrived at the farm. Three battered old cars took up the space in front of the house. There was no sign of the twins but their van was parked directly in front of the grimy kitchen windows. I noticed a group of cows sheltering under the trees in the corner of the adjoining field and wondered where Jean-Luc was.
As we got out of the van the front door opened and Marie appeared in a brightly coloured apron over denim dungarees and black knee high boots, closely followed by the twins. With arms folded across identical blue overalls, they adopted a position at each side of her and glared at us. Marie was not pleased to see us. She shouted something and Karl asked where Jean-Luc was. With a wave in the direction of the cowshed she released a torrent of abuse. Karl sighed, shook his head telling me to ignore her, and turned toward the cowshed. 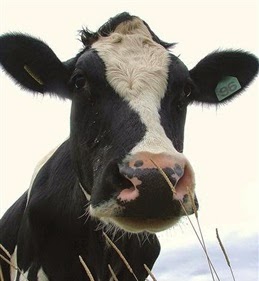 As we entered I was instantly aware of a damp, musty smell. The place was freezing cold and in the gloom I could just make out a figure in the far corner slumped on a bale of hay. I was shocked by the sight of Jean-Luc; pale and drawn with at least a week's growth of beard. He was staring at us, but said nothing. As we got closer I could smell his body odour and could make out dark shadows under his eyes. The poor man looked as though he hadn't slept in days.
Karl called his name and shook his shoulder. Jean-Luc replied in a flat monotone, saying Marie's brothers were planning to sell Hilda and believed they would get a good price for her, due to her magical powers. He also believed they wanted to take the farm from him, and so he'd decided to go on hunger strike until they left.
We both did our best to change Jean-Luc's mind, telling him he would become ill. But he wouldn't have it. All he did was dismiss us with a wave of his hand and continue to stare into the gloom.
I was disgusted with Marie and Karl was fuming. I have never seen him so angry. He marched out of the cowshed, up to the front door of the house and banged his fist on the door until Marie appeared. He demanded to know if she was at all worried about her husband. She laughed, saying he was useless. She said her brothers were now helping with the farm and complained that Jean-Luc did nothing but sit in the cowshed day in day out. She laughed again, claiming that Jean Luc had more feelings for the cow than his own wife.
"What?" Karl shouted. "You're jealous of a cow?"
There was a moment's silence before Marie stepped out from the doorway, marched up to Karl and spat at him. Before he could respond, she shot back into the house, and slammed the door behind her.
I was speechless. We stood in the pouring rain for a few minutes waiting to see if the door would open. Then Karl turned to me and said he thought Jean-Luc should come back to his place. Although he does have a large house with three or four bedrooms I thought Karl was making a mistake. I was just about to tell him this when Karl added that he would also take Hilda, putting her in one of his sheds. I reminded him about hay and food, but he dismissed this, saying Jean Luc could bring enough to keep her going for a couple of days.
We found Jean-Luc in the same position in the cowshed. He listened whilst Karl told him his plan but shook his head. It was explained that Hilda could come too, but he would have to sleep in the house and not with Hilda. At last Jean-Luc nodded and stood up.
It took us about fifteen minutes to get the food supplies into Karl's van: sisal, a bag of protein supplement and enough hay for a couple of days all banked up against the two writing desks. But then it was time to get Hilda. With the other cows watching with interest, Jean-Luc led her out from the field. She seemed perfectly contented and we had no problems persuading her to climb into the back of the van. However, Jean-Luc insisted on sitting with her, convinced she would be scared.
We said nothing to Marie. As we drove off I caught sight of her brothers staring out of the kitchen window. With their expressionless faces, they could easily have been a couple of statues.
When we got to Karl's we settled Hilda in one of the sheds, arranged her hay and filled a old bath-tub with fresh water.
Jean Luc had a shower and then came down into the kitchen, wearing clean clothes Karl had lent him. While he looked better, the clothes were far too big, making him appear like a clown. We all had some of Karl's chicken soup with Jean-Luc having an extra helping. I asked him how long he had been without food, but he shrugged, saying he couldn't be sure.
When Karl dropped me off at my place I told him I thought he might be making a mistake by letting Jean-Luc stay. He said he was certain it wouldn't be long before Marie came to her senses and asked for her husband back. I hope he's right. I think Karl can be too generous sometimes.
I phoned Celine this evening to tell her what had happened. She agreed with me that Karl could be taking on more than he realises. She also mentioned she'd been getting silent phone calls and, although she's not too bothered about them, told me that she may not say anything when she picks up the phone until she knows who's calling her. It was only later that I wondered if it might be Adele making the calls. It would be typical of her, especially as she found my phone last week at the supermarket: she could have searched through my contacts and found Celine's number. I tried phoning Celine back to let her know, but her phone was switched off.