Alexander phoned yesterday to say he'd found a new drummer a couple of days ago working in a music shop in Vannes. He said he would be playing with us at the gig we're doing tonight. I said he could have asked me and Ines before going ahead and taking him on. He said Michel was an excellent drummer and assured me there wouldn't be any problems. This is typical of Alexander. He's appointed himself as leader of our group, complains about having too much responsibility, then goes ahead and does this sort of thing without consulting us.
Our gig was at a hotel near Dinan; a lovely old granite house. It was the hotel's fiftieth anniversary and the large conference room had been prepared with tables for dinner. When I arrived, Alexander and Michel were already there and were setting up on the stage. Michel is about thirty and comes from Montreal. He told me his wife is from Brittany and, as they have a six month old baby, wanted to come back to be near her family. They're living with her parents for the time being which he admitted is not ideal. I asked if he'd had a chance to look at the music, he said he'd ran through the pieces at Alexander's and had played most of them before with a similar band in Montreal.
Ines turned up five minutes before we were due to start. She seemed distracted. Gavin was following a couple of paces behind, beaming at the other guests as he passed. I was surprised he'd come, but I guess the ticket price is nothing to him. Ines introduced him to Michael giving her usual speech which included a list of Gavin's operatic accomplishments. (I really think she has gone out of her mind!) Michel looked a bit taken aback when Gavin shook his hand in his usual theatrical way, but he smiled politely.
The room was filling up with guests and once everyone was seated we began to play. I started to relax as it became clear that Michel was fully capable of accompanying the pieces. When it got to our new version of Summertime I had a simple part to play while Ines was singing and scanned the room. I soon caught sight of Gavin. He was seated at one of the tables at the back with two women who had appeared not long after he and Ines had arrived. They were listening to him attentively; laughing at each pause. (What is it that makes the guy so attractive to women? I just don't get it.) He didn't seem to paying any attention to Ines' singing and I wondered whether she noticed.
I wasn't needed for the last piece before our break so I decided to go out and get some fresh air. The rain had stopped and the full moon lit up the patio. It was a cold clear night and as I wandered out into the gardens, I noticed a small wooden summerhouse, no bigger than a garden shed. 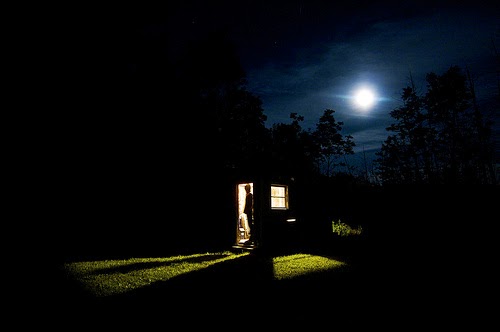 I walked over to take a closer look and became aware of whispered voices and giggles. I froze. I recognized one of the voices. Ines was still singing on stage, so what was Gavin doing out here? I could hear the summerhouse door creak open and darted behind a bush. Gavin appeared, his arm around one of the women he'd been sitting with earlier. They were kissing and giggling as they ambled back to the hall. As they got close to the patio they parted and the woman went ahead into the dining room while Gavin held back. He followed a couple of minutes later.
I could have confronted him outside, but wasn't sure what to do. It was really none of my business. However, judging from their behaviour, it seem obvious Ines knows nothing about this. I moved back to the patio.
As I stood watching the guests through the windows Michel came out, lighting up a cigarette. I spent the rest of the break chatting to him about Canada; a country I've never visited. He said he misses it and finds France very different to how he imagined it would be. He said he hopes to persuade his wife to return to Canada some day soon. I got the impression she might have given him a few romantic ideas about France which haven't lived up to expectation.
Back inside I noticed Ines sitting with Gavin at a table near the front. The woman he had been with in the summerhouse was now back at the other table with her friend. Michel got the impression I didn't like Gavin much. I just nodded. I didn't want to say too much.
Our second half went well and after the gig several people came over to say they'd enjoyed our playing. As we packed up Ines said goodbye and I watched her hanging on to Gavin's arm as they left.
hen I got home the full moon lit up the night and, although it was cold, I sat outside for a while with a glass of wine, thinking back over the night's events. My worst fears about Gavin were realised. Poor Ines! She's the type who's always going to get hurt.