I've been staying at home over the past few days, working on my writing. No food in my cupboards or fridge this morning! I don't particularly enjoy shopping, but it's either that or starvation, so I forced myself out into the morning mist and drizzle.
The supermarket car park outside Lorient was surprisingly empty. I found a space easily enough but spent ages searching for my keys, which I dropped out of my pocket as I got out of the car. I eventually found them hiding under the driver's seat.
The supermarket was warm and bright; mindless background music interrupted every so often by a flat voice announcing the next bargain offer. 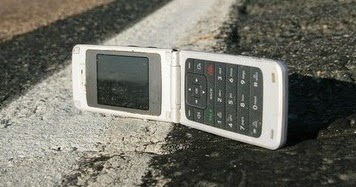 It was while studying a large gateau de chocolate in the patisserie section, and thinking about stopping off at the town cafe on the way back, when I felt a tap on my shoulder. It was Adele; musk perfume and heavily made up face. She said what a coincidence it was to see me here, but then added that she remembered I always used to go shopping on a Friday. Although I didn't comment, I was certain I didn't have any regular routine. She held up a phone - my phone. I felt in my trouser pocket. She laughed, saying she found it next to my car. I reached for the phone but she pulled back, saying something about moving into a new apartment at Vannes. She then twirled round and patted her hair asking if I liked her new style. (It looked no different to me). She also mentioned she would love a coffee. I said nothing to this and we stood in silence with her making a pouting face. I noticed her skin had a strange orange tone and a smudge of lipstick at corner of her mouth, however, I thought it best not to mention this. She asked about Celeste, no doubt pretending to forget Celine's name. I didn't answer to this either, but held out my hand for the phone and told her I was in a rush. "Merde !" she exclaimed and hurled the phone at me before marched out of sight. The elderly man who had been studying the tartes aux pommes next to me, looked up and shook his head saying; "Ah, les femmes, les femmes!"
I was so irritated with myself for dropping my phone. I'm usually very careful. I tried to concentrate on shopping but each time I turned down an aisle, I expected to see Adele there with that stupid grin on her face.
Back home, I was unloading the bags when Karl tapped on the door. I was glad to see him. I told him about the 'chance meeting' with Adele. He thought maybe I should keep a close watch whenever I'm out and try to avoid her. We were having some of the chocolate gateau when Karl mentioned he was concerned about Jean-Luc. He said he'd called round to see him yesterday and Marie's twin brothers have moved in. He thought they were very odd. They didn't say anything and Marie did all the talking for them. He'd discovered Jean-Luc was sleeping in the same shed as Hilda the Cow and asked Marie whether Jean-Luc still believed Hilda possessed magical powers. She didn't seem that concerned but said he did, although she didn't think Hilda had appeared in any of his recent dreams. (It seemed Hilda's days of predicting the winning lottery numbers had come to an end). Karl thought that Marie was less bothered about Jean-Luc's welfare, especially now that her brothers had moved in. When Karl asked how long they were planning on staying there, she said she wasn't sure. I agreed with Karl: we should pay them another visit.
I've been thinking about what Karl had said about Adele. I agree, I just wish she'd stay away.

This song comes into my head