Rodrigo phoned this morning to say that he and Tatiana are leaving for Portugal to stay with Tatiana's parents. I was very surprised by their news and arranged to see them.
I hadn't been to the campsite before and when I finally reached there, the place had an abandoned look about it. The reception appeared empty although the barrier at the gate was up so I drove through to the visitors parking area. As I walked up to the main camping area I passed the small shop with empty cardboard boxes piled up outside and a dirty window displaying a prominent CLOSED sign. 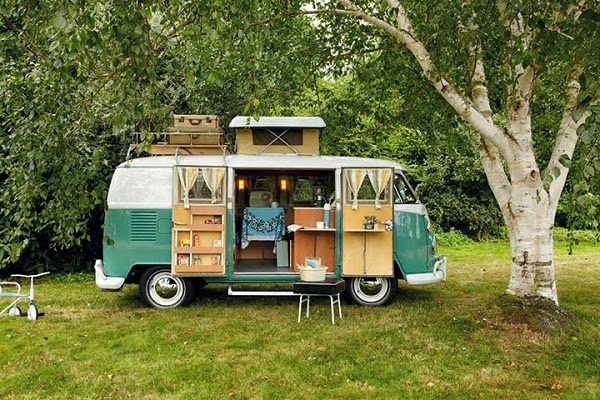 Rodrigo waved me over to an old style green VW camper van. The interior was taken up with a two ring stove, a small sink and four multi patterned cushioned bench seats. Tatiana was sitting at a tiny table bolted to the floor sorting through piles of sheet music. She looked pale and tired and when I asked where Paulo was I thought she was about to cry. Rodrigo explained her parents had driven up from Portugal at the weekend and taken Paulo back with them. He'd been constantly ill with colds and flu and was miserable. They missed him so much they'd decided to leave Brittany and join him.
Rodrigo's construction work had dried up and they'd abandoned their dream of building their own house, at least for the time being. He said maybe they'd return in the Spring but I saw the look Tatiana gave him. She was definitely not keen!
Tatiana made me a coffee and explained the stove was powered by a gas bottle which fitted underneath. I asked if they had any water supply. She shook her head and pointed to a container of water they had to top up from the shower block. She said she was tired of visiting there late at night and early in the morning only to find the tepid water would run dry after a few minutes. She said the place is so depressing. She was on her way back last night and overheard a young couple arguing in their tent. The girl had been crying whilst her boyfriend was shouting at her to take her passport and go back to Spain. The girl was begging him to go with her.
My sympathies were with Tatiana and Rodrigo. They had always been so lively and cheerful and I couldn't believe the change in them.
Rodrigo said there had been several more night raids at the campsite; flashing police lights and sirens at three in the morning. Last night two young men who had just arrived from Germany were arrested. Rodrigo thought it probably involved drugs. I asked Tatiana about her work in the cafe. She sighed and said it started well but one of the local girls working there had taken a dislike to her, constantly finding fault with everything she did. Last week she had been told she would no longer be needed. She had no idea what the problem was. I said the girl was probably jealous and Rodrigo agreed, saying Tatiana was a million times quicker and far more efficient as well as being a million times prettier!
Two days ago the camper van had failed to start. Luckily there was a man with an identical VW on the site who had not only given them a new battery but fitted some new spark plugs too. He was from Toronto and was travelling through Europe, collecting recipes from each country. Rodrigo said he planned to publish the recipes together in one book. When he went into the van to fetch the battery the whole of the side panel was fitted out with compartments containing tools and different parts for the van. Rodrigo couldn't believe how organised the guy was.
I asked how soon they were leaving and Tatiana said at the weekend. I said goodbye and wished them luck. Tatiana handed me the piano music Rodrigo had borrowed and hugged me, reminding me to send Kieran her love.
As we walked back to the car, Rodrigo pointed out Kieran's caravan. No-one had been there for weeks and there had been no sign of his family. It was obvious they didn't care about him. Rodrigo said he'd seen him at Alexander's a few days ago and he seemed happy there.
On the way out a tall blonde woman with hair tied back was walking two small poodles stopped to speak to us. She had a strong Dutch accent and asked Rodrigo where Paulo was. He explained about the grand-parents. She nodded then asked what exactly they were doing on a campsite in the cold. She said it in an accusing tone, as if she was telling him off. Before he could answer she went on to tell him he had a very nice wife, implying Tatiana had a lot to put up with. At that, she dismissed us with a wave and marched off dragging the dogs behind her.
Rodrigo made a face. It was clear he couldn't stand her.
I laughed, saying the woman sounded very nosy. I also pointed out that she too was living on the campsite. Rodrigo said she had a very expensive and well equipped caravan. She'd taken the best pitch on the site and even created a little garden to mark out her territory. He thought she was probably on the run from something or someone.
He stood watching as I drove off, I could see him waving in the mirror. I was sorry to say goodbye to Rodrigo but I think he's doing the best thing for Tatiana and Paulo; also for himself.