I was revising the chapters of my historical novel when Karl phoned, asking if I would help him pick up some furniture from Pontivy. I always liked that town and needed a break, so was happy to go along. 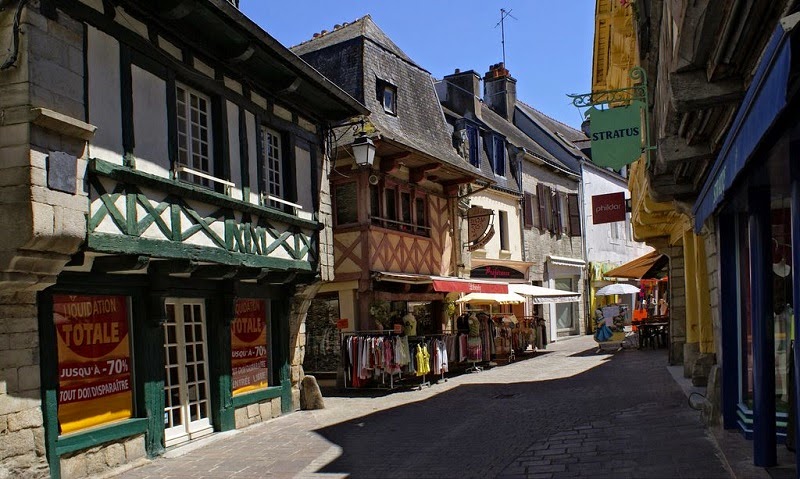 We arrived early and stopped for a coffee in a cafe by the river. Although the weather wasn't as warm as it has been, this was an advantage as it kept most of the tourists away. Karl explained he'd received an e-mail with details of a chest of drawers and a bureau, which would be left for him to pick up from the study of an empty house in the outskirts of the town.
The house, a lovely old granite building with dark blue shutters, built around the 1850's. We picked up the key from the old lady living next door who explained that the family had left several weeks ago and were planning to sell up. The key was stiff to turn in the heavy oak door but we finally pushed it open and found ourselves in a stone tiled hallway leading off into a kitchen. It looked as if the family had just gone out and were due to return at any moment; saucepans left on the stove, discarded cups of coffee and a tea towel laying on the floor. Two chairs were pulled out from under the table and several of the cupboard doors had been left open. The room smelt stale and musty.
"Are you sure there's no one here? " I asked.
Karl looked puzzled. "That's what they told me." He called out. "Bonjour. Il y a quelqu'un?"
No reply.
The kitchen led into a living room with another room at the back; an office containing a desk scattered with papers, a computer and piles of unopened mail. It was in this room we found the chest of drawers and the bureau which Karl recognised from the pictures he'd been sent. 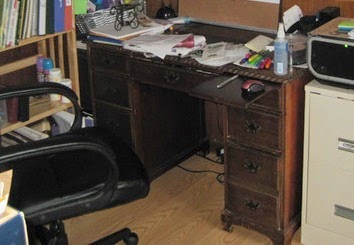 He opened the top drawer of the chest to find it full of notebooks, letters and handwritten notes. We emptied all four drawers, making a pile of the contents in one of the corners of the room. The bureau mostly contained bundles of pens and packets of stationary.
I was still intrigued about the place and suggested we take a look upstairs before we leave. As we climbed the winding staircase I commented how the musty smell had become sweet and sickly; like a cloying perfume. Karl thought it might be coming from the vase of dead roses which stood on the windowsill (but I somehow doubted it).
On the first floor we found three bedrooms and a bathroom. The beds were all made and the cupboards and wardrobes were full. The rooms were untidy with clothes strewn about as if someone had been in a hurry to leave. We went up the next flight of stairs and found two attic bedrooms. In one of the rooms the little dormer window was open and, as soon as we stepped inside, a gust of wind blew the door shut.
Karl bent to pick up a piece of paper from the centre of the floor. He looked at it then, saying nothing, handed it to me. On the note, hand-written in bold capital letters, was the name Anne. As soon as I'd read the name the room suddenly felt icily cold. Then three distinct taps on the bedroom door. Neither of us moved. We just looked at each other.
"Did you hear that?" Karl whispered.
I crept over to the door and opened it: no one there. I could hear a telephone ringing downstairs, but stopped after three rings. We went down to the study to collect the furniture. Just as we lifted up the bureau, the telephone on the office desk started to ring again: three short rings.
Karl picked it up. "Allo?" He waited, replaced the receiver and turned to me. "I think we should go now."
We loaded up the van and went back into the study to fetch the chest of drawers. As we were carrying it out the phone rang again. This time, I answered it on the second ring: silence.
Once the furniture was in the van we returned the key to the neighbour. Karl handed her an envelope containing the money for the furniture. She was a small white haired lady who peered at us over the top of her glasses. Karl asked if there was anyone in the house. She assured us there was not. When we told her about the phone ringing, she laughed. "C'est impossible!" She told us the phone was disconnected. We must have both been staring at her in shock because she laughed again, shook her head and closed the door.
On the way back Karl told me he'd be glad to get rid of the furniture. He planned to restore both pieces and sell them on as soon as possible.
It was raining when we got to his place. Once the van was unloaded we sat in his kitchen, speculating the afternoon's events. Why had the family left so suddenly? Had they been scared off by something? I asked him what he thought about the piece of paper with the name Anne. He said it was strange how it appeared in the centre of the carpet; as if waiting for us to pick it up. Neither of us noticed it when we first stepped into the room. What shook us most was the three taps on the door. Although we tried to explain it away, in out hearts we both knew what we'd heard and neither of us have been able to come up with any rational explanation so far.