So pleased I've finally got my car back. However, I've made the most of being marooned in the cottage by spending the last few days writing some missing sections for my historical novel.
Ines phoned this morning asking if I could run through some new pieces with her. She's now moved in with Gavin and described the house to me in great detail. I think she was keen to find an excuse to show off her new home. Her directions were surprisingly easy to follow and it only took me ten minutes to get there. I drove through a pair of imposing gates up a gravelled driveway to a large white house. Ines was already at the door as I got out of the car. She looked different somehow; a little older perhaps, her hair pulled back, and dressed more formally than usual. She led me through a black and white tiled hallway into a living room with a large conservatory off to one side. One of the walls was decorated with photos of Gavin performing in various operatic venues around the world, and framed newspaper cuttings: reviews of his performances. A number of similar photos of him stood on the marble mantle piece. (I wondered if Ines had placed them there).
The room was very masculine and dominated by two large black leather couches. Perched in the centre of one was an elderly lady who was introduced to me as Gavin's mother. She beckoned me over, speaking so quietly I had to bend right down to hear her. I asked about her home in Wales, but could only make out a few words of her reply: something about it being very cold.
No sign of any books, apart from two hardback travel books placed strategically on the glass coffee table. I peeled one from the table top to take a look. (Obviously no readers in this house!) 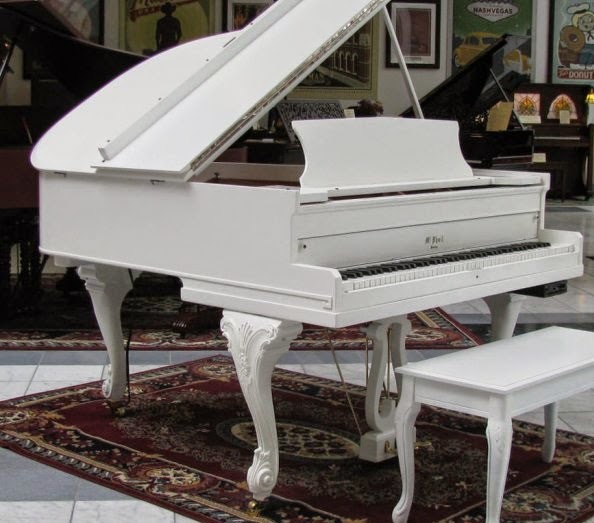 We then went to rehearse in the conservatory where a white baby grand piano dominated the room. We were halfway through ComoFue when Gavin appeared at the doorway. Ines stopped, obviously surprised to see him. He continued to lean against the doorway as he watched us. Ines again stumbled over the lyrics a few times, so we started again. I was certain Gavin was putting her off; he was standing, arms folded, without saying a word. We went through the next piece, Aguasde Março, during which time Gavin left the room without a comment. A couple of more attempts and things got better. Ines suggested we take a break for coffee.
Passing through the living room, I noticed Gavin's mother was still seated on the couch, now asleep, snoring slightly with her mouth open. I followed Ines into the large modern black and white themed kitchen where she made us coffee and two slices of chocolate cake. I was asking where Gavin had got to when Ines told me to listen. The sound of his voice boomed into the room.
I followed Ines as she hurried back to the conservatory in time to applaud the final cadence of NessunDorma. Gavin bowed theatrically, inviting me to return to his piano. (The man certainly enjoys being the centre of attention). For the next ten minutes Gavin took up his position at the doorway while we resumed out practice. Whenever we finished a song, he neither clapped nor smiled once and I had the feeling he somehow disapproved.
When I arrived back home I found a plastic bag hanging on my door handle. Inside was a dark blue jumper I hadn't seen for months. I took out a folded note.
"You left this at mine. So sorry we keep missing each other. Adele."


I took the bag and went into the cottage. Why can't that woman leave me alone? I took my mind off Gavin and Adele and spent the evening researching for my book.
Posted by Unknown at 14:33