When I arrived back from Intermarche this-morning Solange was hanging out the washing (she works from home, preparing accounts for small businesses). She told me Pieter is away in London for a few days on business and she's worried about completing the preparations for an important meeting with one of her clients. She hadn't been able to get any work done as she was being harassed by Pepin who was constantly bringing his ball over to her to play. She was desperate to get the work done before Madeleine finished kindergarten so I offered to take Pepin for a walk on Carnac beach. (I'd been tweeting on Twitter and friending on Facebook since 6.30 in the morning so I was pleased to have an excuse for a break). I phoned Celine to see if she wanted to come and we arranged to meet at Ty Bihan, one of the smaller and more peaceful beaches at Carnac. Pepin was totally hyped up; barking and scraping his paws at the window every time I slowed the car down. I told to be quiet but it only made him bark louder and we ended up having a shouting contest!
Celine was already waiting when we arrived. She'd brought along a bag for collecting sea glass. As we walked along the beach she told me how, as a little girl, she and her brother used to spend endless summers on the beach collecting for her grandmother who had bottle lamps with the bases filled with shells and sea-glass. She was reminded of a legend her grandmother used to tell her about a unicorn who lived on the beach at Carnac and slept in a cave at St.Malo. (Seems a long way to travel each day!)
We searched amongst the seaweed for glass, Pepin pulling impatiently on his lead. Every time we stopped he'd run circles around me, getting the lead tangled until I lost my balance. I had to keep a firm hold as Solange had warned me not to let him run off. We stood to watch the boats in the bay and I told Celine about the mystery man on the yacht at the gig last week. He reminded me of the novels by Patricia Highsmith, in which the anti hero, Tom Ripley, got away with his crimes by fooling and manipulating the other characters in the story. It was at this point that Pepin spotted a man running along the beach with two labradors. The lead slipped from my fingers and off he went, racing towards the other dogs. He then made an abrupt detour towards the rock pools as the man with the labradors disappeared in the opposite direction. When we looked there was no sign of Pepin. We called his name; must have spent about fifteen minutes pacing up and down the beach. I began to panic. What would Solange say? What if Pepin had run onto the road! Celine kept reassuring me, saying he would soon come back and couldn't have gone far. But there was no sign of him. The beach was deserted. By now, I was really worried. 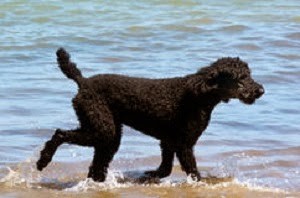 Celine went over to speak to an elderly couple who were strolling arm in arm along the sands. She came back to me with a smile. Pepin was at the cafe at the top of the beach. The couple told her that had been sitting outside enjoying a coffee when Pepin came running up, chasing the seagulls who were busy stealing food from the tables and the waitress had carried him inside. When we arrived it was clear Pepin was loving all the attention; accepting offerings of scraps and leftovers with the two waitresses fussing over him. What a relief! They were happy to watch him while we had a coffee outside on the terrace. I told Celine I'd never had a dog as a child. She said her grandmother had a spaniel called Beau and when he died, she replaced him with an identical spaniel which they called Beau the Second.


Arrived back and handed Pepin back who bounded over to Solange as soon as he saw her then slumped, exhausted on the rug. (Just as well dogs can't talk!)
Posted by Unknown at 09:33