Up at 6.30 this morning and I got right into the draft of my historical novel. I worked through until 9.00 before taking a break. As I needed some bread, I drove to the village and dropped into the cafe-bar for a coffee and croissant (there are times when I yearn for a full English breakfast!). I was about to close the cafe door when I paused. I was shocked. Taped to the inside was a printed cartoon drawing of a cow and farmer gazing into each other's eyes. 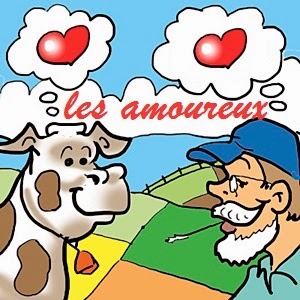 The caption read, Les Amoureux (The Lovers) and it was surrounded by a circle of red hearts: unmistakably a caricature of Hilda and Jean-Luc. I approached Pascal who was polishing glasses at the counter and asked him about it. After telling him about Jean-Luc's troubles I asked him if he would take the picture down. At first Pascal pretended not to understand. I pointed to two other copies behind the bar and another by the television. He eventually sighed and promised to remove them, muttering that the English have no humour. I noticed his smirk when he brought over my coffee and croissant. He then asked if I knew a woman with dark hair. At first I couldn't think who he meant. But when he told me the woman had been in several times asking about me; wanting to know if I went there often and who I came with. I knew then he was talking about Adele. I told him I had no idea who the woman could be. (Pascal is the biggest gossip in the village and not to be trusted). After that, I'd lost my appetite and left half my croissant (a rare thing for me as I hate wasting food). On my way out I took the poster down and slipped it in my pocket to show Karl.
Celine has just turned up. I forgot we had planned to go to a festival this-afternoon. I'll finish this blog later (tomorrow).
Posted by Unknown at 13:37