Went with Karl to pick up a bureau from a house clearance just outside Quimper. The house was owned by an elderly lady who'd recently died and her son met us and also showed us a mahogany sideboard which he asked if we would like to take at no extra cost.
Karl seemed happy to take it and sang tunelessly to John Lee Hooker all the way back. He dug out a CD of SeasickSteve which his daughter (who lives in Munich) sent him and asked me what I thought. I said the album is similar to J J Kale; a thoughtful choice, adding that the photo of artist also has a resemblance to himself: Karl wasn't impressed. I told him about Jean-Luc and Hilda (the magic cow), suggesting we call in on the way back. 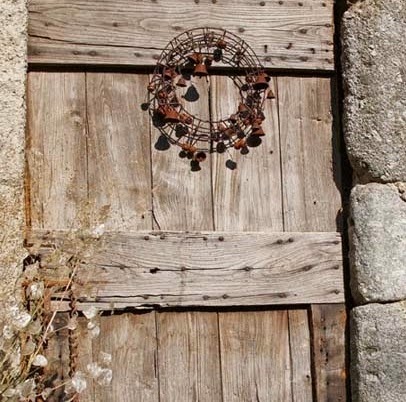 When we arrived, the farm had a desolate air about it. I thought it unlikely that Marie had returned from her mother's. The front door was locked and bolted which was odd as, on my last visit, I remembered it being open. Jean-Luc peered at us through the crack in the door and told us to hurry as he ushered us in.
The kitchen stank: a stale musty smell fused with an aroma of cowpat and body odour. The floor was scattered with hay and half-chewed corn cobs, swarms of flies darted around the dishes piled up in the stone sink, and cups of untouched coffee had been abandoned around the room, some starting to gather a layer of green mould.
Hilda didn't budge when we entered, but stood gazing placidly at Jean-Luc whilst Bruno sulked behind the threadbare armchair. Worst of all was Jean-Luc; dark shadows under his bloodshot eyes, his skin a deathly pale. He beard was a straggly mess and his hair stood up in tufts. He told us that two nights ago he had been woken at about three in the morning by loud whispers coming from the kitchen. He crept downstairs and discovered two of Marie's brothers, "Imbéciles stupides!" were attempting to lead Hilda out through the front door. He chased them away claiming they were trying to kidnap her. We said nothing to this. Karl filled up the sink and started to wash up the dishes and I collected up the coffee cups whilst Jean-Luc ranted on, calling Marie a traitor because she must have given her key to her brothers. He said he'd phoned her earlier that day, trying to convince her of Hilda's powers.
Karl suggested that perhaps the brothers had made their kidnap attempt so that Marie could return home. Jean-Luc considered this, but dismissed the idea. He shook his head vigorously. "They have always been jealous. They are ignorant peasants!"
We tried to reason with him, telling him he must put Hilda back in the field, but he was paranoid about another kidnap attempt. He told us he has to keep the door bolted otherwise Marie will use her key and try to snatch Hilda away.
Karl searched the cupboards and fridge: no food in the house. Jean-Luc asked him to take some money from a jar near the sink to buy milk and bread. He then pulled out a tattered piece of paper from his pocket and showed us a list of numbers he'd written down, insisting Hilda had told him the numbers. He folded the paper carefully, handed it to Karl, and asked him to buy a ticket for next week's lottery. Karl was reluctant but Jean-Luc pleaded with him, saying he could no longer leave the farm. The man was close to tears so we agreed, but only on condition that Jean-Luc attempts to clean the kitchen and speak to Marie.
Karl stopped for a coffee when we got to my place and we both agreed that Marie has to return and Hilda has to go. The problem is, how to convince Jean-Luc.