There was a scratching at my door at 5.30 this morning. I dragged myself out of bed wondering why Pepin was up and about so early. But when I opened the door, it was Coco. I gave him a couple of biscuits and let him sleep on my bed until a civilised hour. I guess he might have been shut in a barn or shed somewhere for the last three days. Better let Laura know as she keeps asking about her. 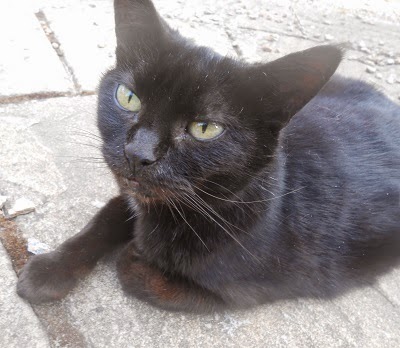 Benjamin and Madeleine came over this morning, pushing more flower petals through my letter box. I taught Benjamin some more words in English; flower, butterfly and cat. He was keen to help me stake up the hollyhocks which have blown over in the wind.
Practised this afternoon at Alexander's. Rodrigo brought Tatiana and Paulo along, plus Kieran, a young English boy of about fifteen. Rodrigo and Tatiana have a habit of both speaking at once and whilst Kieran and Paulo were kicking a ball around the garden they explained he's has been living with his mum and younger brothers and sisters on the campsite for around six months. Two weeks ago his family returned to England to sort out some business, but left Kieran behind. Rodrigo and Tatiana felt sorry for him and have since basically adopted him. They have enough to deal with themselves, but this is a typical example of their kindness.
Kieran was very quiet at first but became quite animated when the subject of music came up. He knows a lot about metal and heavy rock, particularly Nirvana, Foo Fighters, and Alice In Chains, even earlier bands such as King Crimson and The Pixies. He had brought his guitar along so he played Under the Bridge by The Red Hot Chilli Peppers - very talented.
We had a quick run through our pieces; just Alexander Rodrigo and me as Ines is away for the whole of August. This seems to really annoy Alexander; "Bloody singers - always got an excuse!" Even when we took our coffee break out in the garden, he continued to moan about her and then started to complain about his job. No wonder Simone was out shopping for the day.
Tatiana complained about how crowded the campsite has become. The entertainment every Saturday night is the same accordion player and singer; probably friends of the owners. With so many camper vans and caravans on the site there is hardly room for them to move. A few nights ago she woke up about three, looked out of the camper van to see floodlights and police cars everywhere. There seemed to be a raid taking place. She was sure the Dutch woman with the poodles is somehow involved; convinced she's an "international drug smuggler". Rodrigo laughed and told her not to be so silly.
Kieran joined in with the next practice session before we packed up. I later wondered what his family are up to, and when (or if) they will be back.


This evening I went through my twitter account and updated my Facebook page. I had to spend a lot of time uploading the interview with Laura as some of it got cut off when I first put it on You tube. Finally got it sorted it out now.