I was busy editing the last section of my interview this morning when Celine turned up. She had just been to care home in the area; interviewing the residents about Breton folklore, recording their stories from childhood.
While I made coffee she told me about the legend of Ankou who she dramatically described as the personification of death. 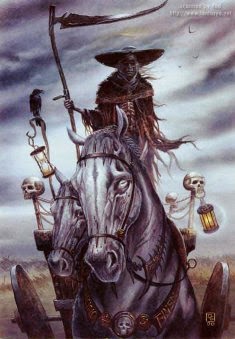 He appears as a tall, thin man wearing a long black coat and a wide-brimmed hat which covers his face. He has a cart pulled by two black horses; one young and strong, the other old and thin. Two skeletons walk behind, tossing souls into the back of the cart. Celine told me how many of the residents were familiar with a story of three friends who came across Ankou when they were on their way home after a night of drinking. Two of them threw stones at his cart, breaking the axle, then ran away, leaving the third friend to help fix the damage. Finding a branch he replaced the broken axle and gave Ankou his shoelaces to tie it to the cart. The following morning the two friends who had ran away were both found dead. The one who helped Ankou was alive, although his hair had turned white and he never spoke of the incident again.
Celine was animated as she recounted these stories and seemed moved by them.
I cut her a slice of my chocolate cake and that seemed to do the trick. 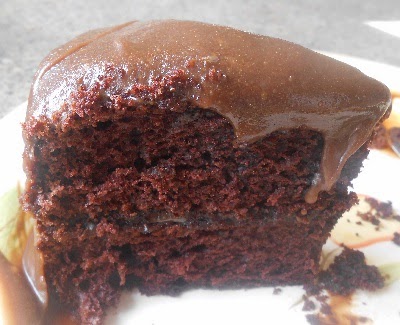 She went on to tell me about the Bugul Noz, a kind and gentle fairy spirit who lives in the woods of Brittany. However, due to his hideous appearance, he is a reclusive creature: so ugly even the woodland animals avoid him. I sensed Celine has a soft spot for this spirit. She showed me a book about Breton fairy and folk tales which she'd found at a market for only two Euros. She left the book with me to look at.
Pepin came bounding in and persuaded Celine to donate half her slice of the cake (He really is a greedy dog). Benjamin and Maggie also came knocking on the door. I was about to tell them the couldn't come in as I'd put down ant powder everywhere but - too late - Celine said invited them in (she's far too soft). She'd been on the beach at Ty Bihan early this morning and showed them the bag of sea glass she'd collected. There were all different shapes and sizes, mainly blues and greens. She's really after reds and purples.


I made pasta with tuna and salad for dinner and Celine left at about eight. (Still haven't got the edit of my interview finished!)
Posted by Unknown at 02:09