Had my three-month appointment at the Dermatology Department in Vannes this morning. Arranged to go round to Celine's afterwards. I told her about my Bullous Pemphigoid and said if she wants to see what it looks like she should have a look at my video on YouTube. Just like everyone else, she's never heard of it.
Her little cottage is packed with so many interesting things. She has an old oak dresser filled with Quimper pottery which she inherited from her grandmother . She showed me how the pieces are all signed by HB Henriot. They're so distinctive, particularly the design with the yellow rooster on several of the plates and bowls.
She has saucers filled with sea glass and assorted seashells lying around. She told me there are five beaches near Carnac, the largest is Carnac Plage but the best for collecting are the smallest, Ty Bihan and Legenese. 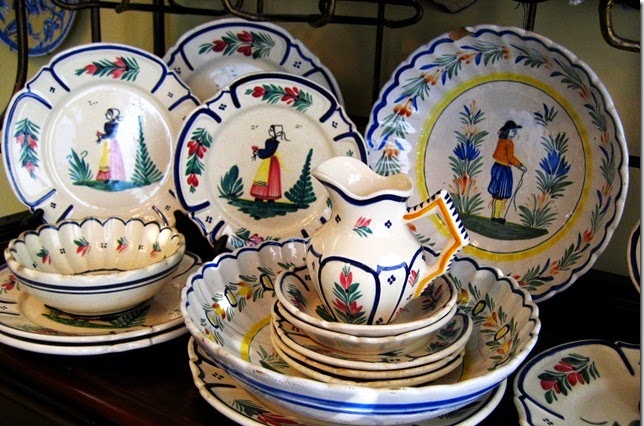 I asked her about her stamps and had a look through the albums whilst she was making us coffee. She has an interesting collection, mainly from the former French colonies (although I was horrified at the way the stamps were all crammed between the pages!) When I asked if she'd been to any stamp fairs, she told me not since she'd had a bad experience with one of the dealers. He wouldn't leave her alone; kept texting and turning up at the cottage. I asked how she rid of him. She explained that her brother had been staying at the time and answered the door, pretending to be her boyfriend. "That made to stop him!" Celine laughed.
She made some more coffee and brought a tray of gelettes (Breton shortbread biscuits) into the lounge. Napoleon was snoozing on the sofa. It was so peaceful.
I decided to tell her about Adele. I explained how I'd had a brief relationship with her which all started off well but after a few weeks became increasingly concerned at her possessive and controlling behaviour. Having learnt how vengeful Adele was about her previous break-ups, I decided the best tactic was to find ways to put her off me. This seemed to work and we finished the relationship a few months ago. I didn't go into more details at this stage, but told Celine how Adele turned up the other day at the cafe-bar in my village and spoke to me as if nothing had changed.
"It is simple, non? You must tell her your true feelings. You must be direct!"
I admitted that I've never found confrontation easy.
Later, as I got up to leave I noticed a set of three framed pen and ink prints on the wall. They all depicted beautiful elf-like characters with long flowing hair. The first picture showed one of these creatures peering from behind a fountain, the second showed another sitting near a tree combing her hair, and the third was was of one perched on top of a Dolmen (similar to the standing stones at Carnac).
Celine told me these creatures are called Korrigans; French spirits from Breton mythology. They have red flashing eyes and, similar to mermaids, they haunt fountains and wells singing and combing their long hair. At Halloween they hide near Dolmens and lay in wait for victims.
"I'd better be going before it gets dark," I laughed.
Celine smiled. "My Grandmother used to tell me tales of them when I was a little girl. If I was naughty she warned that the Korrigans would get me. But I was always good !"
Celine told me they are from pages of a book she found at a market in Dinan, around the time she was researching the subject. She said that, although she disapproves of plates being torn out of old books, she couldn't resist framing them.
Glad I told her about Adele. It's good to have a sympathetic listener.