I have gained a piano student. Solange called over on Sunday and asked if I would be willing to teach Benjamin; just for half an hour each week. He's five and she and Pieter are keen for him to learn to play an instrument. I didn't really want to get back to teaching again, but don't mind making an exception Benjamin. Solange had already bought a beginner's book for children which she showed me and insisted on paying me for the lessons (maybe she'll reduce my rent!)
I was a bit fed up that morning. I'd had a phone call from Celine. Her father had taken a turn for the worse and had passed away during the night. She's understandably very upset and is staying at her brother's until after the funeral. All her family thought he was improving so, although he'd been ill for a long time, his death still came as a shock. She said the funeral will be very quiet. She hopes to be back soon. It's difficult to know what to say.
At four o' clock Benjamin arrived for his lesson. He was very excited and showed me a picture which he'd drawn of himself sitting at the piano. Next to the piano he'd drawn an alien blob like figure which turned out to be me. After admiring his new pair of shoes I persuaded him to sit at the piano and try playing some of the keys. I thought he wouldn't be able to concentrate for very long and my plan was to start with a very simple tune from his book. We got through the first three bars of Alouette when he climbed off the piano stool and wandered around the cottage in his usual routine of opening cupboard doors and inspecting the inside of my fridge. He's a nice little boy, very bright and interested in everything going on. When he eventually returned to the piano and I got him to clap the tune of Alouette and sing a few of the French note names. I said how pleased mummy and daddy would be. When Solange came to collect him we both applauded as he proudly showed her what he had learnt. 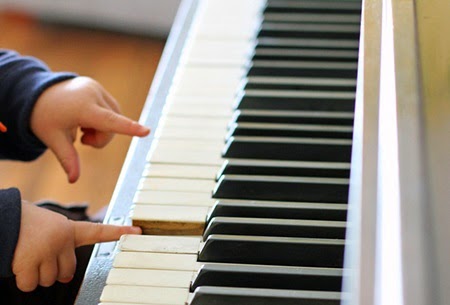 Solange mentioned she has a lot more work coming up as she's expanding her accounts business. She's finding things difficult with the children so has arranged for a Swedish au-pair to stay. She'll be attending the language school for three mornings a week and will help with the children in the afternoons and weekends. Apparently her level of English is a higher than her French.
Yesterday morning I'd just parked my car after returning from the supermarket in Lorient as Solange was showing a tall, very fair girl around the garden who I guessed must be the au pair. They came over and Solange introduced Ann-Sofie. I asked when she'd arrived and she answered quietly in perfect English, ten o'clock on Tuesday morning. When I asked if it was her first time in France she just nodded. Solange mentioned that Ann-Sofie is writing a book in English and suggested she could come over to my cottage so I could check the grammar and spelling. Again, she nodded before following Solange into the house.
This afternoon I was practising the new pieces Ines had chosen when there was a tap at the door. Ann-Sofie brought in her lap top and placed it carefully on the table. I made us coffee and asked about Sweden. She comes from Uppsala, a town North of Stockholm. She's a student at Uppsala University but has taken a year off. She hopes to eventually work as a translator either for the United Nations or European Union in Strasbourg. I commented that her English is very good and she said she thinks English is much easier but finds French difficult.
Her book is set after the Apocalypse when zombies rule the world. The remaining humans live in a secret underground world and the main focus is on the struggles of Niels and Elsa, a young couple, who I guess are based on Ann-Sofie and her boyfriend. There were some good descriptions and her two main characters are believable and well-developed. I was surprised at how gory the zombie scenes were. Ann-Sofie clearly has hidden depths! She's written twelve thousand words so far. I asked if she'd seen the original film, Night of the Living Dead, but she didn't know it. She liked the T.V series, The Walking Dead. I've heard of this but haven't yet seen it seen it. Apparently the whole zombie culture is popular with young people in Sweden at the moment, so she's hit on the right subject. Vampires seem to be in fashion too, especially with the recent Twilight series. She didn't like the trend of modern vampires being too nice and thinks they should all be evil as in Bram Stoker's original Dracula.
She asked if I had something of my writing she could read. I told her about Amatore's Restaurant and showed her the book on Amazon but I didn't think it appropriate to give her a passage from there, so I suggested, The Widow of Duxbury, from my historical novel.
She sat quietly reading and when she finished she said she like the description of the widow and thought the she must be a witch. I asked if she writes descriptions of each of her characters. She was enthusiastic about this, saying she'd drawn pictures of them all.
She left abruptly to go next door and came back a minute later with a sketch book full of drawings. She showed me pages filled with groups of zombies which reminded me of scenes from Michael Jackson's Thriller. Her drawings are very good. It's obvious this is where her real talent lies. I asked if she'd always liked drawings and if she'd thought of going to Art College. She said her mother is an artist with her own greeting card business in Sweden, but she's fixed on the idea of becoming a translator. At the back of her sketch book she showed me some cartoons of a super hero she's invented, a flying bear wearing goggles and a cape. She'd drawn these for her brother who's twenty-four and has Downs Syndrome. He loves anything to do with super heroes and has built up a collection of comic books and watches Batman films over and over again. She said she misses him and plans to send him a new cartoon every few days.
I wondered if she feels a little homesick already. When I asked how she's getting on next door, she said Pieter and Solange are very nice and so far she likes the language school in Vannes but has only just started there. Most of the other students are older. There are a couple of German girls but she's the only Swedish student. She said it was nice to meet me and left, saying she was going to talk to her mum and brother on Sykpe.
Outside a storm's blowing. I see on the news there are snowstorms in Scotland and Northern England, also heavy snowfall in parts of New England. I hope we don't get anything like that here. I phoned Celine who said she'd like to call round soon.