As I was on my way out to visit Celine this morning when Solange came over and asked if I could look after pepin for a day next week. She also said she's worried about Ann Sofie who's very homesick. She's missing her mum and brother so much that she's considering returning home. Solange thinks it would be a good idea if I continue to help with Ann Sofie's writing. She's written another chapter for her book and would like to come over but worries about being a nuisance. I asked Solange to pass on the message that she's welcome to visit any time.
When I arrived at Celine's cottage she was standing outside, inspecting the remains of the bedraggled geraniums from last summer. When I spoke to her on the phone yesterday she didn't say much and sounded tired. Her father's funeral took place two days ago but she stayed on to help her brother clear out the apartment. She'd only arrived back home yesterday afternoon. I asked how the funeral had gone but it was clear she didn't want to talk about it.
Inside the cottage was as cluttered as ever; books spilling out of the bookshelves and photo albums piled in a heap on the sofa. A fire was burning away in the hearth. I sat down in one of the armchairs whilst Napoleon fixed his gaze on me from the top of a bookcase. Celine's landlord had been looking after him and the rabbits while she was away. Apparently, Napoleon has been sulking since her return, refusing to pay her any attention. The two rabbits peered out from their hutch in the corner of the living room.
Celine cheered up when I gave her the pictures from Madame Dupont's shop. She was interested to hear about the mad old lady, laughing at my impersonation. I mentioned Ann Sofie and how she was homesick. She remembered how, when she had gone away to teacher training college at eighteen, she had cried the first time a letter arrived from her dad. She suggested that, once the weather improves, we take Ann Sofie out and show her a few places.
She showed me some photos she'd brought back from her dad's apartment. There was a formal one of him, looking very serious, standing in front of his class at the lycee. Another was of Celine aged about six with her brother, Claude, and their grandmother. They were standing on the beach at Carnac, squinting into the sun. All three of them looked happy and relaxed. She handed me a photo of her parents on their wedding day, gazing into each others eyes. Celine's mother had become ill with multiple sclerosis soon after Celine was born and she could only remember her in a wheelchair. Her mother was a prisoner in her wheelchair, yet always seeming cheerful. I can understand how difficult it must be to talk about her. She died when Celine was fifteen.
She told me she and Claude had found a box of love letters written from their parents before their marriage, tied up with faded red ribbon. She had no idea her father was so sentimental. They'd also found a box of her mother's jewellery, along with a pile of her dresses. Her father had kept a scarf Celine remembered her mother wearing. She said it still smelt faintly of her perfume and took Celine straight back to memories of her childhood.
Another album was full of dancing and singing certificates from school, carefully arranged in date order. I asked about the cigar box standing on the dresser which was decorated with sea shells. This had been a summer's project one year at her Grandma's which her father had kept.
Celine brought in two bowls chicken soup and a baguette from her little kitchen and we sat in the armchairs by the fire. I noticed the carriage clock ticking away on the mantle piece above the fireplace. Celine had brought it from her father's apartment while her brother took a watch and some photos. The flat was now empty and ready to sell. I admitted I had never been close to my own parents. My father, an officer in the Royal Air Force, was distant and aloof and my mother who was now in a nursing home in England. Neither of them showed me any genuine affection. Celine said she wished she had done more to help her father, realising he'd been very lonely. She added that the funeral had been awful; far worse than she'd imagined it would be.
It was only after we'd finished the soup and washed up that she said she wanted to talk to me about something. Whilst she had been away her landlords had noticed, on several occasions, a dark haired woman drive up and sit in her car outside the cottage. They asked her what she wanted and she said she was a friend of Celine. When they told her that she was away, the woman thanked them and left. However, they have seen her two or three times since and once, late at night, sitting alone in her car. They had taken down the car registration number, but we both knew it was Adele. 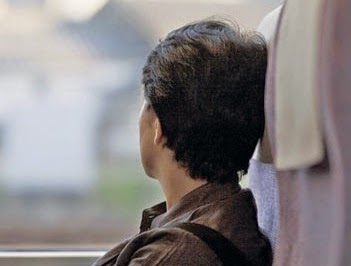 Celine got up and fetched an envelope from the dresser. Inside was a letter in Adele's handwriting saying that, after meeting up at a recent gig where I'd offered her a lift home, I was now seeing her again. Since that evening, she wrote, I had decided it would not be right for me to see Celine again. She finished by advising Celine not to contact me again. The letter had been pushed through the letterbox and was waiting on the door mat when Celine arrived back.
Apart from keeping the letter as it's signed with Adele's name, neither of us know what to do. I mentioned the police but, on second thoughts, we agreed Adele hasn't actually done anything serious enough to report. Celine said she'll keep a lookout for her car and note down any times she sees her. Adele must have followed her back to the cottage at some stage: it's all a bit worrying.
We found some hooks and hung Madame Dupont's pictures up along with her parents' wedding picture. We looked through the rest of the albums. There were lots of birthday and Christmas celebration photo's and a lovely picture of Claude with Celine as a baby.
Celine took out the rabbits which hopped around the living room until they were tired and stretched out on the rug in front of the fire. Napoleon, all the while, glared at them from his lofty position on the bookshelf.
We talked late into the evening. Celine said wants to concentrate on putting all her collected legends and myths together for her book and I'm determined to get my historical novel completed.
It was after midnight when I arrived back at my place. I tried to work on my writing but couldn't stop thinking about Adele and wondered what she might do next. Although we decided to ignore her for the time being. Maybe I should confront her.