Phoned Celine this morning. She's returning on Sunday. Her father has improved slightly, is out of hospital and is now staying with her brother and sister-in-law. She's worried as he's still very ill and in a lot of pain.
Wednesday was Karl's birthday. He wasn't bothered about celebrating but I persuaded him to come out for a drink. He's concerned about Stefanie. She and Tomas have only been back in Berlin two weeks and already Tomas has been questioned by the police about a recent break-in by animal right activists at the Bayer Pharmaceutical factory. Stefanie told her dad that hundreds of cages had been broken into, allowing countless rats and mice to escape. She insists she had nothing to do with it, but Karl's not sure what to think. Whilst he has a certain amount of sympathy with Tomas' views, he's understandably concerned about Stefanie getting into trouble.
The bar in town was quiet that evening; just four or five regulars. The television, which is permanently switched on, was showing an old film with subtitles. The picture kept breaking up but nobody seemed bothered. Karl was telling to me about his furniture restoration business when the bar owner, Pascal, interrupted and asked if he was interested in buying some original shop fittings from the 1960s. His aunt had run a ladies clothes shop in the town for nearly fifty years. Now aged eighty three, she had decided to sell up and retire. She was desperate to clear the shop in preparation for her move to Rennes to live with her daughter. He described Madame Dupont as a real character who had never missed a day's work. According to Pascal, generations of women patronised her shop, travelling from all over Brittany to buy fashionable clothes there. He wrote down the phone number of her daughter, Elsie, and recommended Karl phone her as soon as possible.
Pascal was interested to know why we had ventured out on such a cold night. He had guessed we were celebrating and Karl reluctantly admitted it was his birthday. Everyone in the bar cheered. Louis and Yves -- two of the regulars -- broke into a drunken rendition of Happy Birthday. They persuaded Karl (who is fluent in French) to join in. However, finding my pronunciation hilarious, were determined to teach me the words. They continued to sing in high-pitched voices whilst slapping Karl on the back and repeatedly wishing him "Bon Anniversaire". (Although it was obvious they were making fun of us, at least it gave them something to talk about over the long Winter evenings).
The following afternoon Karl phoned Elsie and arranged to meet Madame Dupont at her shop in the town. He asked me to go along in case he should need some help with loading the shop fittings. 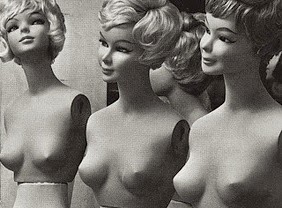 Three naked mannequins stood guard in the shop window and an ancient bell above the door announced our arrival. As we entered, we were greeted with an overpowering scent of lavender perfume together with a hint of mothballs (a smell I remember only too well from my own childhood).
Madame Dupont, dressed in a fur coat which hid most of her violet suit, was a tiny woman with white hair, a pale heavily-made-up face with two smudges of rouge across her cheeks. She was perched at the edge of a canvas beach chair with a large leather bag propped against her leg.
Standing behind the chair was Elsie, a plain woman in her sixties who, in contrast to her mother, was dressed in black with her grey hair tied severely back. Apart from the beach chair and two large display cabinets standing against the wall, all the fittings, including the shop counter, had gone.
Madame Dupont held out a heavily ringed hand with fingers adorned with bright red nails and raised her face to be kissed. There was a movement from the bag at her feet and from the opening peered a small dog with a red spotted bow tied round its' head. Karl bent down to pat him. The little dog bared his teeth, fixing him with yellow eyes and growled. The old lady snatched up the dog from the bag and clutched him to her, telling Karl not to scare her little baby. She then spoke to the dog in a high pitched voice, asking if poor Fou Fou was scared of the nasty man. Karl was about to say something, but thought better of it. He asked asked about the cabinets. 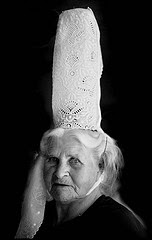 I noticed three framed photographs hanging on the wall and I went to have a closer look. They showed several groups of women wearing traditional Breton costume; embroidered dresses, white lace aprons and white head-dresses. Ignoring Karl's request, Madame Dupont raised herself from her perch. As she stood up, her coat reached below her knees and, even in her high heeled shoes, she could only have been about five foot tall. She said the photo's had been taken in her village near Pont L'Abbe in the late 1940's. The women were wearing a traditional head-dress called a Coiffe. She explained there were of different designs in each region and the women in these photos wore the tall round Bigouden Coiffe which is distinctive to Pont L'Abbe. With her daughter acting as translator, she then proceeded to give a history of Breton costumes. I knew Celine would love these photos so I listened closely and tried to take in what she was telling me.
At one point Madame Dupont came to an abrupt halt and slumped back into her chair. She then appeared to nod off. I could hear her gentle snoring while her daughter continued to tell me about the photos. Madame Dupont woke with a start and demanded to know who we were and where we both came from. When Karl told her he was from Berlin she said she remembered seeing many German soldiers when she was a little girl during the German Occupation in the Second World War. She informed us that Lorient had been a U-boat base and that three shelters had been built. The Allies had tried to destroy these shelters by repeatedly bombing the city until it had been virtually destroyed. Karl said that Berlin had also been heavily bombed, and many historic churches and buildings destroyed, but when her daughter translated this, the old lady just waved her hand dismissively.
A framed certificate was produced for us to admire which her daughter explained was a gift from the Mayor of the town to thank Madame Dupont for over forty years service to local commerce. Our host became very animated as she described the presentation at the Hotel de Ville and the report in the local paper. The cutting was produced which showed a photo of a beaming Madame Dupont receiving her certificate whilst local dignitaries and shop owners looked on. She launched into another speech which her daughter translated. She had seen many changes in the last forty years and none of them for the better. She was especially contemptuous of department stores, telling us that she had been able to provide a level of service no department store could possibly match. She was not sorry to be retiring and felt that customer service was not as valued as it once had been. She deplored the latest styles of clothing and thought that French women -- once rightly regarded as the most stylish in the world -- had lost their sense of elegance and no longer took pride in their appearance. Her voice rose to a high pitch as she described how, not so many years ago, a woman wouldn't think twice about spending at least an hour each morning dressing and putting on her make-up. In her mother's day no woman would dream of leaving the house without a matching hat, gloves and bag. At this point she paused and produced a piece of chicken from her coat pocket which she dangled in front of Fou Fou's nose. The little dog, still in her lap, licked his lips and opened his mouth to be fed. Once the meal was over, Madame Dupont smothered the dog with kisses, telling him what a good boy he was and how mummy was so proud of him.
I glanced at Elsie, who was standing motionless with a resigned expression, and guessed she'd never received this amount of attention.
Madame Dupont continued with her lecture, her face taking on a look of utter disgust as she described the everyday uniform of jeans. Her breathing became heavy and she broke into a fit of coughing. Elsie patted her back, telling her in a quiet voice to calm down and not to get stressed. The old lady glared at her daughter and pushed her away, reiterating her previous statement that she was proud to be able to say she had always offered the highest standards of customer care; treating each customer as an individual, guiding them in the right direction and always giving her best advice.
It was difficult to break into Madame Dupont's recollections and I sensed that Karl was becoming impatient. Thankfully, her daughter announced they would have to be leaving.
Madame Dupont said the shop was in the process of being sold but she didn't know what it was to become. She hoped it would not be turned into a bar. Karl smiled and said that wouldn't go down too well with Pascal, who wouldn't like the competition. Madame Dupont sighed at the mention of her nephew and then announced that we could have the cabinets for nothing.
Karl kept a straight face and thanked her, but he couldn't hide his surprise as loaded them up into the van.
He was quiet on the way back; only commenting that he'd lost his grandfather and two uncles during the war. Later, over coffee in his kitchen, he said he was pleased about the cabinets, saying he would get a good price for them at auction. I asked if he'd think of putting a bid in for the shop but he dismissed the idea as too much hard work.
Back at my cottage I cleaned the framed photos and wrapped them up as a present for Celine: just the sort of thing she likes. Spent the rest of the evening updating my website. Still a lot to do.