Karl has just told me that several nights ago, at about 3.00 a.m, he'd heard a noise in his house that sounded like footsteps. Going downstairs and still half asleep, he was amazed to find Stefanie in the kitchen. She had the fridge door open and was, literally, stuffing herself with food. He was shocked by her appearance. Her hair was lank and greasy, she was pale with black shadows under her eyes, and was wearing a torn t-shirt and stained jeans. He got her to sit down and tell him what was going on. It turned out she'd been living in Tomas' squat with no electricity, heating or hot water. Karl was extremely angry that she'd hitchhiked all the way from Berlin. When asked why she couldn't pay for the train fare, she admitted she had no money, as she'd lost her evening waitress job. Karl wanted to ask if Tomas had anything to do with this, but reluctant to bring up the subject of Stefanie's boyfriend, he thought better of it.
By half past three Karl could wait no longer, and had to ask where Tomas was. Stefanie spent ages before admitting that he had been arrested after the police questioned him about a break in at a pharmaceutical research centre with thousands of Euro's worth of damage to the factory and hundreds of rats, mice and rabbits released from their cages.Two other boys from the squat were taken in with Tomas but Stefanie insisted that, although she did know about it, she had nothing to do with the break in. This was not a first offence for Tomas and he has been sentenced to four weeks in prison as he was unable to pay the fine imposed by the court. Tomas' parents are wealthy bankers who could easily have paid, however, they had washed their hands of their son, and want nothing more to do with him. Karl did his best to comfort Stefanie, assuring her that Tomas would be fine and would probably soon be released. He told me, however, that he was relieved to see Stefanie return without him. She'd done so well in her end of year exams and had been determined to continue on in September.
Since coming back she's already found a summer job at the local kennels run by a Dutch couple who breed Poodles and Labradoodles just outside Languidic. Stefanie studied their website before walking to the kennels to enquire about work. She's been there for two days and told her dad she's really enjoying the work. Although she assured him she has no intention of releasing any of the dogs, or causing any damage to the property, Karl is very concerned. I pointed out that, now she's not in touch with Tomas, she's started eating properly again and already looks much better.
Karl asked me to come and look at her room. I followed him up the stairs and into the small bright room overlooking the garden. Photos of Tomas and Stefanie, along with pages of letters and poems were taped all over the walls. Stefanie had made a chart of the days until Tomas was due to be released and was religiously crossing each day off. A threadbare jacket lay across the bed which had a damp musty odour. Stefanie refused to wash it as it was Tomas's. As we made our way back down into the kitchen Karl told me he was concerned about what will happen when Tomas is released.
Yesterday was Stefanie's twentieth birthday and Karl asked if I would come over and could I also bring Ann-Sofie? When I asked Ann Sofie, she was very enthusiastic to come and Solange agreed she could have the time off.
It was late afternoon when we arrived. Ann-Sofie was given a guided tour around the house and gardens and we sat down by the lake to watch Gary the goose. Stefanie certainly seemed much happier than the last time I saw her. She was followed everywhere by a collie dog, Bon-Bon, who she said had followed her home from the kennels. She dismissed Karl's concerns, saying the dog was a stray and unwanted. Ann-Sofie and Stefanie spoke to each other in English and seemed to get on well. She asked for a piece of paper and began sketching Bon-Bon. Stefanie showed it to us, clearly impressed.
Dinner, cooked by Stefanie, was roast chicken with potato dumplings, red cabbage and carrots. She'd also made a Gugelhuf; a hoop shaped cake with a chocolate filling. She's placed twenty pink candles around and explained that in Germany it's traditional to keep the candles burning for as long as possible. 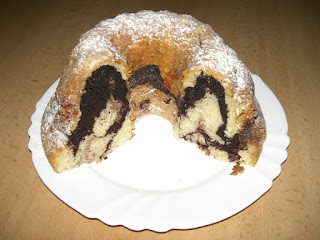 Karl said she used to have a wooden birthday wreath with twelve candles, one to be lit each year, until she reached the age of twelve. Ann Sofie told us that in Sweden a child is brought breakfast in bed with a piece of birthday cake; traditionally a Princess Cake, layered with sponge and cream and topped with green marzipan. We gave Stefanie our presents (chocolates we'd bought on the way over) and we sang Happy Birthday in a variety of languages.
Karl had given Stefanie money for clothes. She asked Ann Sofie if she would go with her to Vannes or Rennes for a day's shopping and maybe to the cinema. They checked on her laptop and discovered a zombie film called Maggie about a teenage girl who becomes infected in an outbreak. Of course Ann Sofie was enthusiastic about this, telling Stefanie all about her book. Karl and myself teased her, suggesting it was the perfect film for her. Ann Sofie was interested in hearing about Berlin and the university. Listening to all her questions I did wonder if Stefanie is destined to become the next character in the zombie book. There was no further mention of Tomas.
Stefanie borrowed her dad's van for the evening and, after they'd gone we sat talking whilst Bon-Bon sat whimpering at the front door. Nothing would distract her (not even the offer of food). When I left, she was still sitting there, waiting patiently for Stefanie's return.
I haven't seen Ann Sofie today and wonder what Stefanie's told her about Tomas.