I was on the phone to Alexander when Ann-Sofie knocked on the door. She sat and waited patiently whilst Alexander continued his diatribe against our drummer, Michel. Apparently, he and his family had left unexpectedly and returned to Canada. I can't say I was surprised after what happened at the Golden Wedding party, but I do think he could have given us a bit of notice. Needless to say, Alexander was fuming. I noticed Ann-Sofie had brought over her latest instalment of Midnight Hour Zombies, but Alexander was in full flow and would not be stopped. It was another five minutes before I managed to end the call. 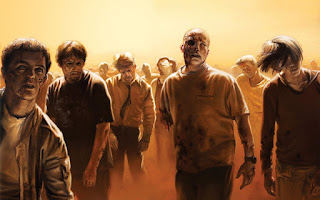