Benjamin and Madeleine have been particularly noisy this weekend, banging on my door, demanding to come in. Solange was outside yesterday, weeding the pathway when I overheard her shouting at Benjamin, ordering him go back indoors. When she brought him over for his piano lesson today, she told me he'd been caught drawing on the kitchen wall and that Pieter was very annoyed with him. She left him with me, giving him strict instructions to behave. He nodded and smiled sweetly up at her.
We ran through Au Clair de La Lune from his music book and for the first five minutes he concentrated. After that he started running around the cottage, crawling along the carpet and leaping on and off the sofa. I could see we weren't going to get anywhere so I took him back next door. Solange said they were going out for the afternoon, as it was her mother's 75th birthday. Ann-Sofie who in the kitchen I invited her for dinner, saying Celine was coming and was keen to ask her about illustrations for her book.
When Celine arrived, she was holding something which she passed to me, telling me to read it carefully. It was an envelope written with her name and address. Inside was a formal wedding invitation, printed on cream card with a border of roses.
As a joke, I asked if I was invited too. Celine snatched the card from me and read it out loud. The wedding was to be held on 31st July at St. Jean Baptiste Church at Pouy-Sur-Vannes between Adele Marchent and Jacques Ditronc. I laughed and told Celine this was great news as we wouldn't be bothered by Adele following us around any more. Celine was far from happy. She insisted this was not a normal wedding invitation, and asked me why I thought Adele would send this to her. I couldn't see why this mattered. I admitted it was an odd thing for Adele to send, but at least now she would be someone else's problem. I went to the fridge, took out the bottle of wine Paul had given me to celebrate his baby's birth and poured out two glasses. Raising my glass I made a toast: No More Adele! But Celine wasn't having it. She sighed and shook her head. She asked me if I recognised the man's name. I told her I couldn't care less who he was, and couldn't understand why she thought I should be interested. She looked at me, clearly irritated, handed me the card and told me to read the name. Jacques Dutronc. It meant nothing to me. I conjured up an image of a respectable business man, solid and dependable. I felt only sympathy for him, whoever he is. Celine was questioning me again, asking me if I was certain I didn't recognise the name. I insisted It meant nothing to me. She told me it was name of the actor who plays Van Gogh in the 1992 film of the same name. I asked if she was sure and wondered if the name could be a coincidence. But then I remembered Adele had been keen on Van Gogh's paintings and fascinated by his life. This all made sense. I explained this to Celine who said Adele must be using her to send me a message. If she is, I don't know what the message is. The whole situation is just ridiculous. Why pretend she's getting married? She must be completely insane. Celine is very concerned by the fact that Adele knows where she lives, but what can we do?
We were still discussing all this when Ann-Sofie arrived. Celine asked if she would be interested in illustrating her book, explaining that it was all about myths and legends. Ann-Sofie was very enthusiastic and went next door to get her sketch pad. By the time she'd returned we'd been through another fruitless discussion about Adele and her wedding invitation. It was a relief to change the subject. Ann-Sofie showed Celine her sketches, including the one of Marie's twin brothers. Celine asked if she could draw three creatures, the Nain, the Goric and the Ankou. Ann-Sofie scribbled notes whilst Celine gave a brief description of each of them. I remembered the Nain resemble gargoyles and have feline claws and devil type hooves. They are dark and small creatures with gleaming red eyes who speak with harsh rasping voices. They haunt ancient dolmens where they dance around, chanting the days of the weeks (except for Saturday and Sunday, which are sacred protected days and cannot be spoken of). Ann-Sofie was making notes and I listened to Celine's descriptions. The Goric are dwarves who inhabit druid monuments or hide beneath ancient castles. Every night they dance around the stones of Carnac and, if a human interrupts them, he would be forced to join in until he dies from exhaustion. When they're not dancing they guard hidden treasure and, rumour has it, that a golden hoard lies beneath one of the Menhirs of Carnac. Ankou, is a spirit, who takes the form of a skeleton and collects the souls of the dead. He travels around Brittany in a cart pulled by horses and wears a large black hat to hide his face. 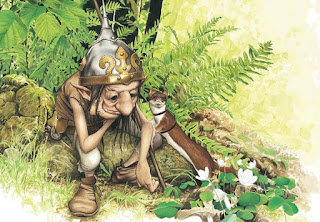 Ann-Sofie sketched as she listened to these stories, and Celine said she would particularly like a picture of the dwarves dancing around the Menhirs. She also asked her about the myths of Sweden.
Ann-Sofie explained that trolls originated in Norse mythology, appearing in both Sweden and Norway, as do dwarves and elves. She told us the story of Huldra. a troll woman living in the woods. She's fair and beautiful but has a long cow like tale which she hides when she meets people. She's not evil, unlike Nokken, a mysterious water spirit who resides in lakes and ponds. He's a handsome young man and talented musician who plays his violin throughout the night and entices woman to their deaths. Ann-Sofie is a born storyteller, and obviously loves talking about her homeland. Soon after dinner (tomato and caramelised onion tartin served with salad) Ann-Sofie left, as she has a test at the language School early in the morning.


Celine and I discussed the drawings, but it wasn't long before we returned to the subject of Adele and the invitation. I said we should ignore the whole incident, as she's clearly looking for a reaction. Celine said that it's easy for me to talk and pointed out that she's the one being targeted. She was subdued when she left. Maybe I'm dismissing Adele's behaviour too easily. But I really don't see what we can do.
Posted by Unknown at 04:04