Had a nice surprise this morning when Paul knocked on my door. He and his family are staying at the gite over Christmas and New Year. It was good to see him again. He said Isabelle is doing well; the baby is due in April. He had come round to invite me over for dinner this evening. When I mentioned Celine is coming to see me, he said she would be welcome too. I told him I would bring the Banoffee Pie I made yesterday. I also asked if he wanted to use my piano. Knowing he wouldn't be able to resist, he spent the rest of the morning playing Poulenc and Bizet. 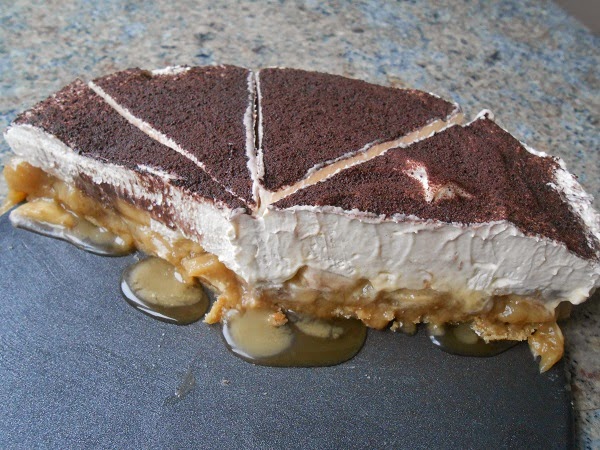 Celine arrived about five. She'd been busy interviewing residents of an elderly people's home near Vannes; recording their memories of folklore and local legends passed down by their parents and grandparents. Soon after she arrived we went over to the Gite where Isabelle was about to serve the first course: French onion soup. She looked very well and said that everything was fine with the baby.
Mathilde showed us the little Christmas tree which her parents had bought that morning from the market near Lorient. Isabelle whispered something to her and she handed me one of the presents from under the tree, telling very slowly in French that I wasn't allowed to open it until Christmas morning. When I asked what she wanted for Christmas, she screwed up her face in concentration. Her mum explained that she was crazy about anything to do with the Disney film, "Frozen".
In respect of me, Celine, Paul and Isabelle spoke in English, but to Mathilde, who's only eight, it was in French. I could understand some of it, anything too difficult I asked Celine to fill me in. I was able to follow the conversation when Celine asked Mathilde if she was looking forward to having a brother or sister. I don't think Mathilde would be jealous; she seems excited but she did say that if it's a boy she's going to send him back!
The soup was very good (nothing like the French onion soup I used to make back in England) and the main course (beef bourguignon) was even better. Isabelle said she's taken several cookery courses in Paris and now would like to start up her own catering company.
Over dinner Celine asked if Paul and Isabelle they had ever been to the Forest of Broceilande; a magical forest near Rennes which is believed to be the last resting place of Merlin from the legend of King Arthur. Mathilde was very interested in this and wanted to know more (She's very bright for an eight year old). Celine told her that Merlin's father is said to be one of Satan's devils who was sent to earth to create an evil child who would have control over men. Mathilde listened, enraptured, as she was told how the baby, Merlin, was christened and so lost his evil powers and grew up to use his magic to do good. Celine said the Forest has many magical places including a spring called The Fountain of Baranton. It was here that Merlin first encountered the witch, Viviane, who whom he fell in love. Mathilde insisted her parents take her to visit the forest before they return to Paris (I'd be interested in seeing it too).
My Banoffee pie went down well; everyone seemed to enjoy it. We finished with coffee. Celine asked if Isabelle and Paul had any names for the baby. Paul said they had decided not to find out the sex and so were waiting until the baby was born. Mathilde suggested Beyonce for a girl and Justin (after Justin Bieber) for a boy: her parents were horrified! Celine said her son, Julien, is in Melbourne, Australia. He's twenty-three and a marine biologist. Isabelle thought it must be strange to have Christmas in the Summer, but Celine said he's been there two and a half years and so should be used to it by now. I think she misses him, but it's so expensive to travel there, she said she doesn't know when she'll next see him.
It was nearly ten when we left and made our way back to my cottage. I couldn't believe it when I saw a figure standing at my door. My first reaction was to panic. But as we got closer I saw it was Adele. She was leaning against the door, and had a parcel wrapped in Christmas paper. I asked her what she was doing. she smiled at me, ignoring Celine and said she hadn't been waiting long but had wanted to give me my present. I unlocked the door and she followed us in. Celine said nothing but sat down in one of the armchairs whilst Adele handed me the present. In the light of the living room, her skin had a strange orange tone. Her eyes were overdone with black eye-liner and as usual, her lipstick was smudged. Her eyes were fixed on me. She said she wanted to give me her present now as she was spending Christmas with her mother and would be leaving tomorrow.
We both heard Celine mutter, "Thank Goodness!"
Adele swung round and glared at her. She began shouting at her in French, saying she was a cheap whore and to keep her nose out of her business. Celine said nothing to this but just laughed. This only caused Adele to shout louder. The last thing I wanted was an argument but I told Adele, as calmly as I could, that she should leave. She glared at me, then at Celine before turning away, and slamming the door behind her. I opened the present. It was a framed picture of myself with Adele, taken at a restaurant where we had gone for her birthday. I told Celine what I remembered of that day. As soon as we'd left the restaurant Adele had accused me of flirting with one of the waitresses and had sulked for the rest of the evening. 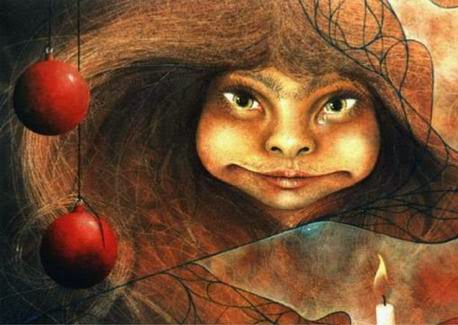 Celine said Adele reminded her of Le Lutin; gnome-like fairies who cause trouble and play tricks on people. They take on different forms, including black chickens, white horses and goats. Celine laughed, adding that maybe they take on the form of Adele too! At the home she had visited that afternoon she'd interviewed an elderly man whose grandfather used to tell him Les Lutins had pushed him off his bicycle when he was a young boy. He said the creature would hang around the crossroads and country paths and most often took the form of a goat who would jump out and run into the bicycle, knocking the grandfather off. Celine said the man was convinced this was true.


Although we laughed about Adele being one of Les Lutins, I can't help worrying about what she's going to do next.
Posted by Unknown at 14:33