Stayed at home today as Solange has gone to Paris with her sister and niece and I'm looking after Pepin until Pieter gets home from work. Solange's niece is hoping to get into the Sorbonne and they've gone to look around the college. They're staying overnight and will be back tomorrow. Pepin has spent most of the day sitting at the fence, staring at the driveway and pining for Solange. I carried him into the cottage several times but it wasn't long before he ran outside again and took up his usual position. There's devotion for you! 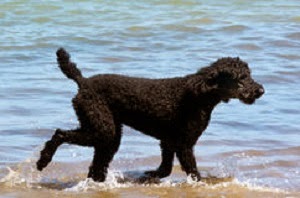 Ann-Sofie's mother and brother left yesterday after staying in the gite next door. I saw them a few times during their stay and on the Saturday evening I was invited over for a traditional Swedish dinner. Ann-Sofies's mother, Linda, looks so much like her daughter. When I mentioned Ann-Sofies's drawings they showed me Linda's website where she designs greeting cards. She has many different designs and sells them all over the world.
Linda said they'd been to Dinan that morning and were very impressed with the historic town. She showed them to me Ann Sofie's sketches of Place des Merciers with it's half timbered houses: they're very good. 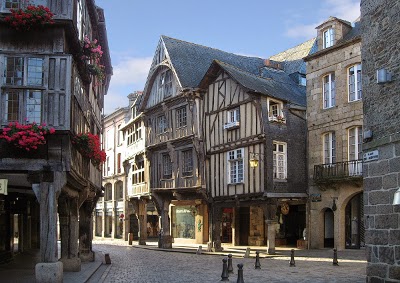 Max, Ann-Sofie's brother, who has Downs Syndrome, was very quiet. I think maybe a little shy. He shook my hand and gave me a formal bow. Both he and Ann Sofie laughed. Apparently he's been given strict instructions not to hug people until he knows them.
Whilst in Dinan, Max had insisted on climbing the 158 steps to the top of the Tour de L'Horloge but only managed to get halfway. He got scared and had to be led back down to wait with Linda. Ann-Sofie said the views from the top were amazing. She could even see the distant outline of Mont St Michel.
While they spoke Swedish to Max, they switched to English for me. Max was obviously confused by this, and looked worried. I asked Ann-Sofie if he was still interested in Super heroes. She told me he was really looking forward to the new Batman film due to be released in 2016 in which Batman battles Superman. I asked which actor was his favourite. He whispered to Ann-Sofie that he likes Chris (Christian Bale). He also likes Henry Cavill who plays Superman in Man of Steel and will also feature in the new film. Linda has helped him write to the actors, who've sent signed photos of themselves. He's very proud of them and they are now up on his bedroom wall. 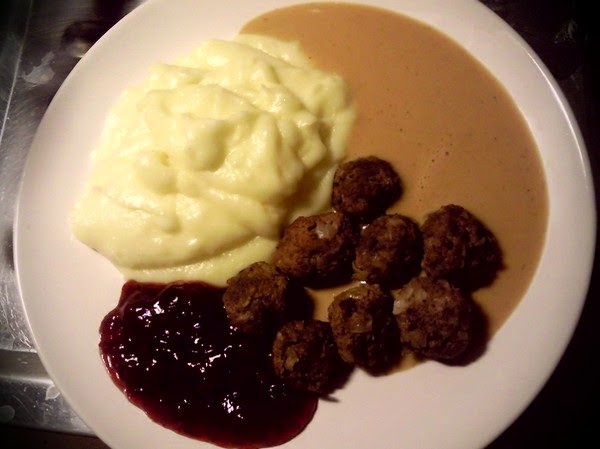 The diner was delicious. The main course was Kottbullar met Poatismos (had to ask her to write this) which is meatballs with mashed potatoes in a gravy sauce. This was served with lingonberries preserve which Linda had brought with her. I've never tried this before. Apparently, ligonberries are used in Sweden in the same way people in the U.K use ketchup. They put it on everything! The taste is quite bitter, a little similar to raspberries. (I decided not to put any with my meatballs). We had Swedish pancakes for dessert (again with ligonberries). Linda said the fruit has been used in Sweden for centuries as the fruit can be preserved through the long winters. Max put half a jar on his and got teased by Ann-Sofie. It's obvious she is very close to her family and very protective of Max.
Linda mentioned her homesickness, telling her she should stay here as her French has greatly improved. I said she'll regret it later if she leaves so soon. Although Solange and Pieter are very good to her it wouldn't surprise me if she goes back home.
Linda was very impressed with Brittany. She'd hired a car and they've been to Rennes a few times and for walks on the beach at Carnac. She really liked Quimper. They spent a whole day there where all three had sketched a view of the city from one of the bridges crossing the Odet River. Ann-Sofie told Max to fetch his drawing to show me but he refused to.
The rest of the evening passed quickly. Linda gave me some Swedish recipes, and told me how they preserve food (including Ann-Sofie's despised pickled herrings!)
This morning, before they left for the airport, she brought over a box of Swedish Toscas, which are really almond tarts: a thank you present for helping Ann-Sofie with her writing. She said she's worried about her, knowing how much she misses home, but wants her to stay till the Summer. I promised I'll try my best to encourage her to stay.
Pieter came over this evening to collect Pepin, who was sulking on my sofa. As soon as he spotted Pieter he leapt up, tail wagging, although I think Solange is the person he misses the most.


I notice Ann-Sofie is still here. I had a feeling she might have left with her family. Hopefully she'll settle now; knowing they'll come to visit.
Posted by Unknown at 02:35