I made the most of the sunshine this morning by sorting out the garden. Pepin joined me by racing about like a mad thing, constantly bringing his ball for me to throw. Solange stopped to chat on her way out. Paul, Isabelle, Mathilde, and their new baby Leo, are due to arrive this afternoon and are staying in the gite until Sunday. I mentioned this to Celine when she phoned. She said she'd bring a card and present on her way over. 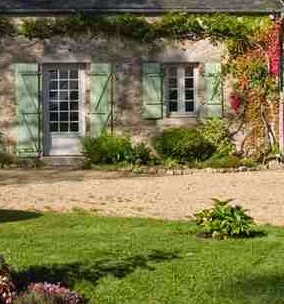 Everything was peaceful outside for a while, until the window cleaner's tuneless humming broke the silence. He told me Solange had instructed him to clean my windows. I was unsure of his accent and asked where he was from, and if he spoke English. He told me he was from Portugal, from a town called Loule in the Algarve. His name was Joao. I surprised him by asking in Portuguese if he wanted tea or coffee. He wanted to know how come I speak the language and I told him about my days in Portugal and Brazil. Loule is a pretty little town I've visited many times. I also mentioned that lived in a village called Olhao, not far from Faro. Joao knows Olhao and Faro well and was interested to hear about my time there. He's been five years in France, and is married to a Frenchwoman. We spoke in a mixture of English and Portuguese and I was amazed how good his English is which he picked up from watching British and American T.V programmes. I asked if he missed Portugal, but he said no; he has everything he wants here in France. He set up his own window cleaning business three years ago and has now built up a large client base. He was just finishing when Celine arrived. She chatted to him for a while, asking what he thinks of Brittany and whether he likes living here. He finished up and had to leave in a hurry as he was late for his next customer.
Celine had stopped off at a second hand shop in Lorient and bought two framed photographs of village scenes in the 1920's. One of a smiling lady, taken in the doorway of her town house and the other of a grocer dressed in a long apron, standing outside his shop showing off his display of fruit and vegetables. I pointed out that there was a corner missing from the frame and I would try and fix it. I can't imagine Celine has much more space on her walls. Her cottage is unbelievably cluttered.
When we went back outside I noticed Paul's car parked in front of the gite. Mathilde came running up, followed by her dad, Paul. She was hopping up and down, insisting we come over immediately to see baby Leo. We congratulated Paul. He's relieved everything went well and Isabelle and the baby are both fine. I remember him telling me about several earlier miscarriages. Mathilde beamed as he told us how she's been so good with the baby and helps her mum. She told us to hurry as baby Leo was awake and waiting to meet us. We followed her across to the gite and congratulated Isabelle who was sitting on the sofa, holding the baby. She looked tired but happy. I could tell Isabelle was pleased with the present, a sailor suit with a matching hat. Thank Goodness Celine picked it. I wouldn't have had a clue what to get!
It's good to see them so happy.
Over dinner Celine mentioned she's seen Adele a few times in the last few weeks and is starting to wonder if she's being followed. She's spotted her in the supermarket three times and again in Vannes twice, but hadn't spoken to her. I said she should have mentioned this earlier, but she dismissed it as a coincidence and didn't seem too concerned. I said to note down each time she sees Adele because I'm convinced there's more to it than coincidence. She's already had to change her phone number and I'm concerned about what Adele will be up to next.


I showed Celine the lemon drizzle cake I'd made earlier. She said she'd never tried it before, but she must have liked it as she finished off three slices.
Posted by Unknown at 06:20